slider Travel Info World
July 7, 2020January 12, 2021 travelworldinfo 0 Comments most dangerous airports in the world
After several hours spent flying over the sky by plane, we often feel relief at the sight of a small piece of land suitable for landing. But this feeling of comfort can quickly turn short when approaching the airports that will follow. Surrounded by water, on a slope, perched at an altitude of 3000 meters or close to a tourist beach … Fasten your belts! We are starting to descend to our top 10 of the most dangerous airports in the world! 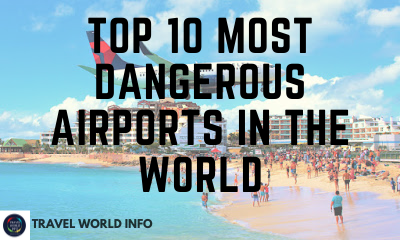 Have you ever seen a take-off and landing strip in the city center? Gibraltar International Airport (Overseas Territory of the United Kingdom) is not only satisfied with a very short landing strip, but it is also crossed by Winston Churchill Avenue, the main route to Gibraltar. Traffic lights prevent cars and planes from colliding! When you land here, you will be fascinated by the breathtaking view of the Mediterranean, but you may also be surprised by another, less pleasant aspect. Indeed, traffic jams are guaranteed on this busy road, so a word of advice: don’t lose patience!

Off Scotland, there is one airport that is unique in the world: Barra International Airport. Located on a fairly isolated island, the weather conditions are extreme. Planes take off and land on a sandy beach. When the tide is high, planes cannot land or take off, thus impacting flight schedules. Seals are also regularly asked to return to the other side of the beach by local employees. The beach is obviously prohibited for tourists for security reasons, but nothing prevents you from approaching it to observe this spectacle more closely (respecting the safety instructions of course).

By planning to take off from or land at Gisborne Airport, you could quite easily pass just a few meters from a train! It is indeed a railroad that crosses the runway of this airport. It is therefore not uncommon to let a train pass before you can leave the tarmac. What makes it dangerous is this detail: priority does not necessarily apply to aircraft!

Yes, contrary to what you might think, one of the most dangerous airports in the world, is in France! It is more precisely in Courchevel that you will come close to a panic attack. The airport is located very close to the ski resort and its landing strip has several risk factors: it is short, steep, dented, and slippery. Ah, and we forgot, the area is located in the middle of the French Alps at 2,008 meters above sea level and often experiences thick fog which obstructs the view of pilots. Just that!

It is not so much the Tioman airport itself that allows it to rank among the most dangerous airports. It is rather its location. Indeed, the latter is in the middle of the mountains and access is very limited. To be able to return to dry land, the pilots make a 90-minute last-minute turn. And the effort must be perfectly mastered! At the end of the trail? A cliff leading straight into the ocean.

Do you dream of discovering this country still largely untouched by tourism but are you afraid of flying? Suffice to say that Paro Airport is unlikely to reassure you. The only air access point for foreigners, it is nestled in the heart of a valley surrounded by the Himalayan mountains.
The airport has only one runway and is only served by the airline Druckair. When you know that only 10 pilots in the world are allowed to land there, you begin to understand what to expect …

Surely you must have heard of this airport located in Saint-Martin, which sees beach attendants being grazed by planes during landing maneuvers. It is somewhat of an attraction for tourists who come to enjoy the sun and the crystal clear waters of Saint Martin. However, when planes take off, on the runway located a few tens of meters from the beach, the reactors cause strong winds favorable to indigestion of sand which leads us to recommend a stopover on the beach of Maho Beach. To date, the airport remains undoubtedly one of the most impressive in the world.

Located on the island of Saba, the Juancho E. Yrausquin airport combines the frightening facts and only experienced pilots are allowed to land there. In the middle of the hills, bordered by the sea, the pilot has no room for error when landing at the risk of making a head-first dive in the Atlantic Ocean helped by a narrow runway of only 400 meters long and which makes it one of the smallest in the world.

The Ice Runway in Antarctica, an airport mainly used by the US Antarctic Program, has the distinction of being built directly on the ice floe at the start of each season. The rare pilots authorized to use it regularly have to face extreme climatic conditions mixing snowstorms and thick fog. Not to mention the dangers linked to the risk of the ice breaking under the weight of the machine…

Direction Nepal this time where is the Tenzing-Hillary airport and its runway. It is from here that a large number of adventurers take a flight to Kathmandu. This airport also serves as the base camp for those who wish to try the dizzying ascent of Mount Everest. Landing there is already an invigorating experience in itself. The runway is tilted 12 ° from the horizontal, and once the airplane wheels are on the ground, the pilot must brake as hard as possible so as not to fall into the precipice which ends the runway. Said like that, it doesn’t make you want, we grant it! But once your apprehension is exceeded, the view is to die … Only figuratively, of course.